The market town of Maria Saal enables its visitors to hike from one epoch to another. Because here – to the north of the provincial capital Klagenfurt, on a hill to the east of the Zollfeld – visitors of all ages can discover the fascinating history of Carinthia, and experience right up close the important places of interest which attract history fans and culture vultures to Maria Saal from all directions.

From the Herzogstuhl to the outdoor museum, from the Magdalensberg to the Ulrichsberg – their histories are significant. Which can also be said of the food and drink in the nearby surroundings – especially the wine!

Maria Saal, a place of pilgrimage

This market town is an important place of pilgrimage for believers from the whole of the Alps-Adriatic region. The reasons for this are the imposing pilgrimage and collegiate church of Maria Saal, and the Chapel in Karnburg, which is well-known as the former capital of the Duchy of Carinthia. Both buildings are among the earliest churches to be founded. The Cathedral of Maria Saal acquired its late Gothic form at the beginning of the 15th century, and then the reconstruction after a devastating fire in 1669 gave the church its present appearance. It has always been a place of refuge for people. Anyone wanting to delve into the history of the place of pilgrimage should be sure to go on one of the popular guided tours of the Cathedral. It is well worth it!

The Carinthian Herzogstuhl (duke’s chair) played an important role in the investiture ritual for the rulers of the Duchy of Carinthia. This ducal twin throne was constructed in the 9th century and is located on the Zollfeld, where its eastern and western seats can still be admired today. The western, older seat was intended for the counts palatine, and the eastern one for the duke of Carinthia. This was where the duke took the oath, received homage, awarded fiefdoms and dispensed justice. The north-western supporting pillar of the backrest bears two inscriptions, which show that the slab had found a second use back in antiquity.

The Herzogstuhl was first documented as the sedes Karinthani ducatus on the occasion of the investiture of the duke in 1161. Between 1286 and 1597 the enthronement of seven sovereign princes is documented. In later times the investitures were conducted in the Klagenfurt Landhaus.

An inscription in Gothic letters can still be seen today at the head end of the middle slab of the duke’s chair: “RVDOLPHVS DVX” – Duke Rudolf. It is assumed that this was inscribed at the behest of Duke Rudolf, the founder, in 1360 by reason of his enthronement. For this an inscription that already existed, but has not been identified, was changed and reused. And incidentally, ten of the twelve stones of the Herzogstuhl came from the remains of the Roman town of Virunum – which is pretty impressive. Wait until you actually stand before the historic witness to those times …

The archaeology park on the Magdalensberg is cared for by the Regional Museum of Carinthia, and informs visitors about everyday life in the Roman provincial capital. As of today, no one knows either its name or the reason why it was abandoned in the first century of the common era.

The town of Virunum on the Zollfeld became the new provincial capital and the later bishop’s seat. Its remains have as yet only been partially uncovered. After many years’ restoration work, the restored amphitheatre, in which gladiators once fought wild tigers, is today almost entirely visible and can be visited by prior arrangement as part of a guided tour. Visitors can even look and feel inside the underground passage used by the gladiators. An adventure for the whole family!

Virunum was a Roman town in the Roman province of Noricum, on the territory of the present-day Zollfeld near Maria Saal. The town itself covered around one square kilometre. The first excavations took place in the second half of the 18th century and at the beginning of the 19th century.

Extensive systematic digs were undertaken from the end of the 19th century to 1931. It was only once the amphitheatre was uncovered that intensive excavation activities recommenced. Today the restoration works on the amphitheatre of Virunum have been completed.

Maria Saal also has a unique museum to offer: the Carinthian Outdoor Museum. Interested guests feel themselves transported to a different time the moment they enter the area. The museum does not offer the usual museum character. The Outdoor Museum is the oldest museum of its kind in Austria.

It presents the forms of rural houses and farms from a wide variety of regions, which enable an insight into the way of living and the economy of past times. As well as the historic farmhouses, visitors are also shown the rural crafts in the so-called “industrial area”, where there are horizontal wheel watermills, sawmills, charcoal piles and a lime kiln. The circular tour through the Carinthian Outdoor Museum also incorporates a nature trail, which familiarises visitors with the plants that are typical of the area and their habitats.

In addition, regular workshops take place, where old knowledge and proven techniques are still passed on today. The museum also has everything you need for snacks in between – so you can allow yourself plenty of time to browse in a time long gone by.

Pleasure in a glass: Karnburg Vineyard

The native Texan Sem Kegley and Georg Lexer run the Karnburg Vineyard in Stegendorf near Karnburg. Here they grow Chardonnay, Pinot Grigio, Sauvignon Blanc, Zweigelt and Pinot Noir in a vineyard of around 6.5 hectares. The grapes are grown here starting from the slight slope and extending to the vines grown on terraces on the southern slope of the Ulrichsberg. Guests can look forward to a spectacular view over the Klagenfurt Basin to the Karawanken.

Their philosophy is “genuine, Carinthian and down to the ground”. You can also enjoy a fantastic meal in the Restaurant Leiten on the Karnburg Vineyard.

Culinary delights at the Gasthof Sandwirt 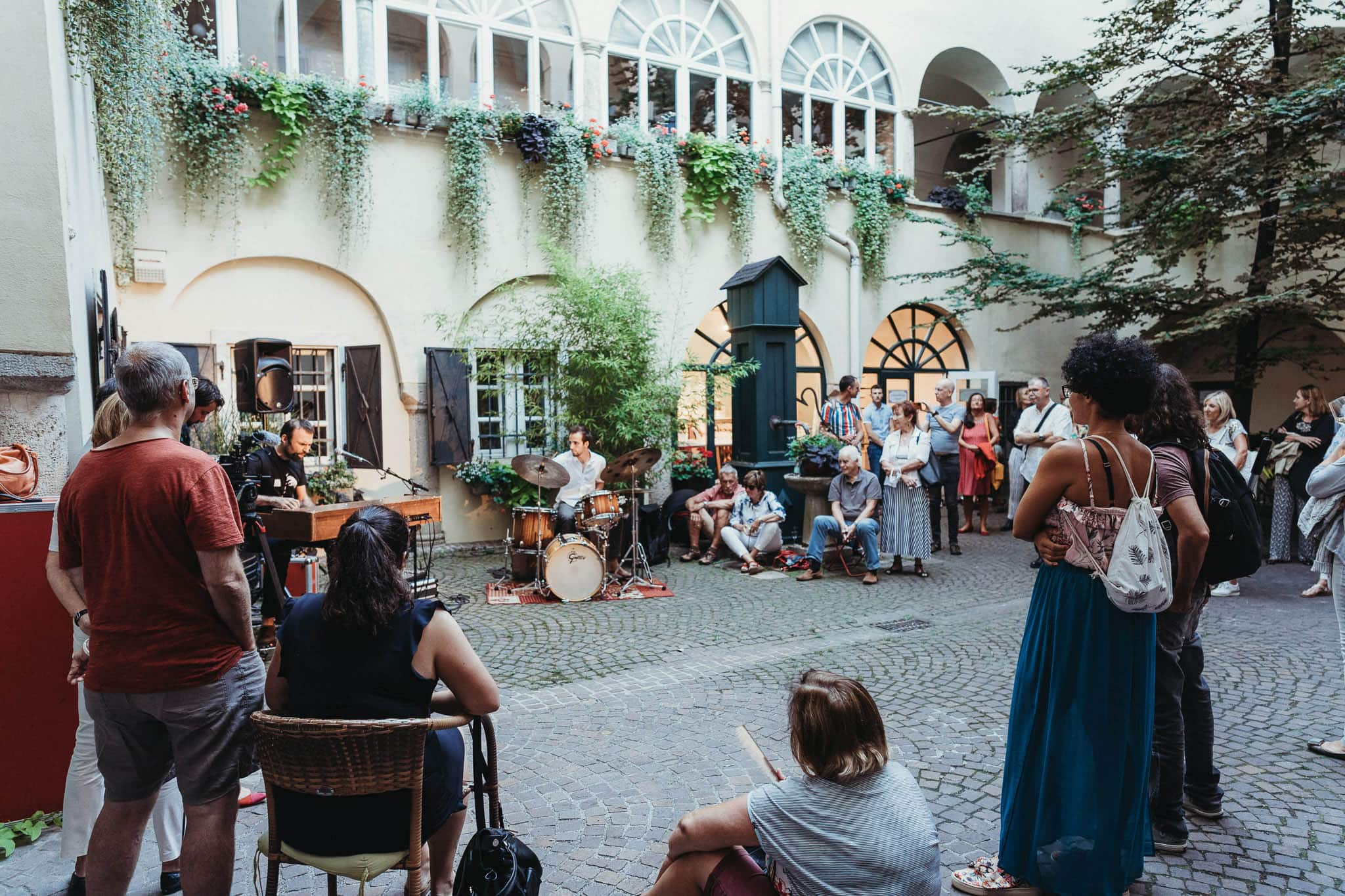